The Stanbridge white duck is a breed that was believed to be extinct  except as natural 'sports' until 2007 when the president of the rare poultry society identified the breed in Gloucestershire. These  birds were from  William Osbourne  who by 2009 maintained 14 Stanbridge ducks and 4 drakes in 3 breeding pens. William  had purchased his original birds from a man in  Aylburton in Gloucestershire, where  a known poultry photographer, Mr Arthur Rice had lived and kept the Stanbridge.  The seller  did not know what they were and labelled  them as ‘Farmyard ducks’ but he did state they ‘laid like stink’.  Their laying ability has also been noticed by William who has stated his Stanbridge ducks ‘start to lay in the first week of February and go on until at least October’, ‘in all that time they would average about 240-250 eggs per duck’. William went on to say he has ‘ been keeping poultry for over 50 years and has never come across ducks that lay as well as these do, not even when I kept Khaki Campbells’.

The breed was originally developed as a separate breed by Lord Greenway in Romsey, Hampshire. There are two schools of thought as to how they were developed. Some say they were developed from a white sport of the Magpie duck, others prefer that  they may have been used in the creation of the Magpie. According to Colin Murton "Captain Greenaway who became Lord Greenaway, came into the equation from another side in that his poultry manager, J.S. Parkin, brought the title Stanbridge Earls Poultry Farm with him to Kent when he came to work for Lord Greenaway.
From the white sports of the Magpie they developed the StanbridgeWhites (Q.E.D ! ), a utility white duck which had a slightly dished bill. Over the last 20 years or so it was fairly easy to spot 'White Campbell's"  which were not so and which had the aforesaid dished bill and if penned a green egg in the showpen." These were submitted by Captain Greenway to Harper Adams for the laying trials  through the 1930's until the outbreak of war in 1938 . ( the same people responsible for importing the Marans Hen  as the first 60 hatching eggs were imported by Mr J.S. Parkin, manager at Stanbridge Earl Poultry Farm in Kent (then owned by Lord Greenaway). I myself had them years ago ( 1970's)  from Jacob Lory and other breeders in Cornwall/Devon and they then laid blue green eggs and the bill discoloured with extreme age as in the Magpie. They laid well into their old age and 10 year olds laying well was not uncommon. Tip if over 1 year old and no spots/ discolouring  to the bill  or a white egg layer get suspicious as yes they may have 'improved' but a change of egg colour and bill = a mixed parentage. Pink bills = commercial Aylesbury aka Cherry Valley input . They were also a good broody but often got severe middle aged sag to the back end after 12 yrs old in the girls ! They are described with breed standards in The Poultry Club Standards Containing a Complete Description of All the Recognised Varieties of Fowls, Ducks, Geese and Turkeys by William White Broomhead Published by Cassell, 1930 and subsequent editions as :- GENERAL CHARACTERISTICS Head -refined, long and straight and in no way thick or . . .

In the  shows such as Royal Agricultural Society of England, 1930 they were then judged in classes with Magpie Ducks By 1957 Standards in USA and Oz  they are then described as Type: favours that of the Pekin, though smaller and hardly as upright. Body: deep and lengthy with broad back and well-developed abdomen but not as low as the Aylesbury. They are regarded as an active dual purpose  breed of duck with a dish shaped bill. They are more upright than the Aylesbury but not as much as the Pekin.  Stanbridge whites lay a pale green egg ( in 1957 ) many now do not however both Cherry Valley and  White Campbells lay white eggs.

This has been a great hatching season for the Stanbridge duck producing 4 drakes and 7 ducks all of which are almost identical in size, shape and colour . The adult stock have gone to a friend and a young pair has gone to another fancier in Northern Ireland leaving me with 3 drakes and 6 ducks for next years breeding season .This breed are a very calm breed of duck . They are identical in shape and size to the magpies with bright yellow/orange bills which tend to be slightly dished . The drakes are slightly bigger than the ducks . The parent stock were fantastic laying birds laying very light green eggs of a good size . The Stanbridge white ducks are great foragers and spend every day in the pond .

I recently had an opportunity to compare them against quality white Campbells also hatched this year . The Stanbridge is substantially bigger ,more upright with a longer bill which is slightly dished than the Campbell.

I also noticed that when the Stanbridge ducklings were about two days old some of them were pure white in colour while others were yellow . I will pay more attention to this next season separating the two colours of ducklings to establish if they are showing an autosexing trait . The Stanbridge white duck is a marvellous eye catching light breed of duck that produces a great number of eggs .They are a breed worthy of more fanciers keeping them .from Guy Richardson 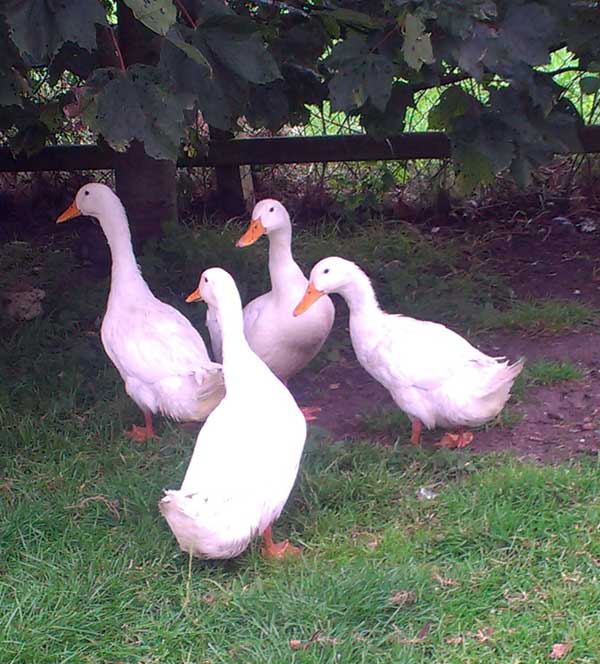 Pics below  from E.J.Russell some of the best yet 'pudgier fronts'  showing their dual purpose breeding 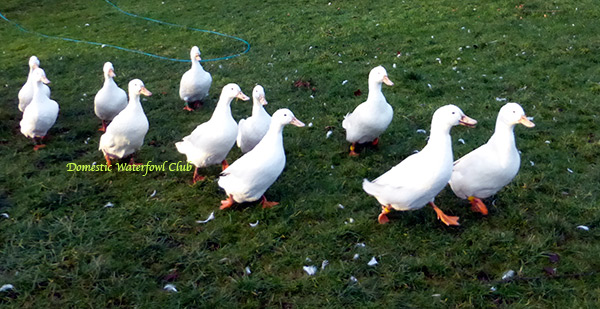 Pics below from Emily Carpenter 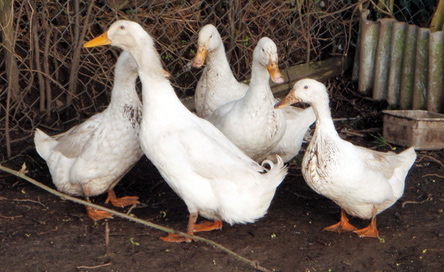 Check Chubbier depth to the body than a Campbell when picked up are a chunkier dual purpose meat/egg breed rather than the Campbell which is more suitable for stir fry or soup . So far none of these resemble the old stanbridge whites from the 60's/70's and are  needing work, bills too dished,type too light
Below a Campbell trio more horizontal carriage   slightly skinnier and no 'low slung bum'
Campbells : White with Orange/ yellow bill and webs Size: Drakes, 2.5 to 3kg Ducks, 2 to 2.5 kg / white eggs
Stanbridge/ Magpie White with Orange/ yellow bill and webs weight Drake: 2.5 – 3.2 Kg, Duck: 2 – 2.7 Kg so near but when handled a much chubbier chest/ blue green to grey pearl eggs
Aylesbury Weight: Drake: 5 Kg, Duck: 4.5 Kg so b hefty Pink Bill like a shovel and profile of a large feathered brick 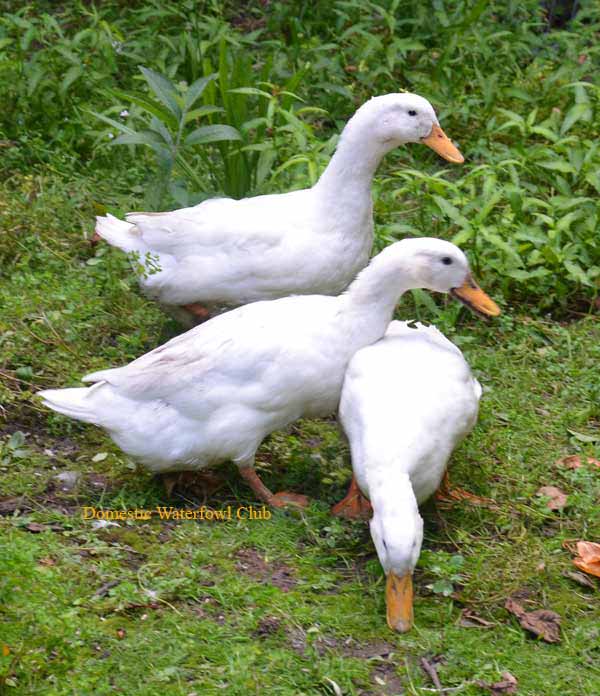 White Campbells above for comparison 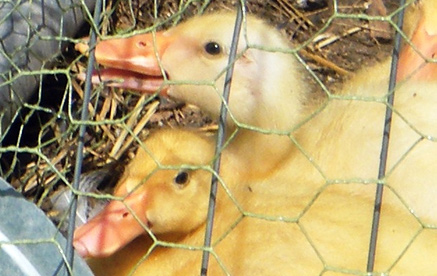 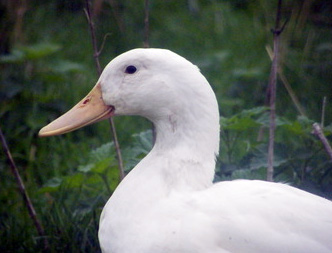 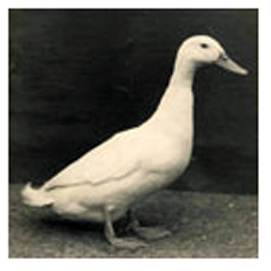 The 1920's pic shows the start of the age discolouration to the bill typical of old Stanbridge Whites  and  making them like Cayuga a bird in the show cage younger  or lose marks for the bill also the droopier back end than the Campbell. Watch also for long flat bills denoting Aylesbury added into the mix. The bill on this one is differing from the early photo showing too much dishing and no age alteration