BREEDING CONDITIONS:
Kept as pairs or alternatively trios ..depending upon the drakes energy levels. They lay one possibly two clutches per year.......thus will not sit and brood if the eggs are removed. Excellent fliers can thus be wing clipped or pinioned ..consult the vet for further information about pinnioning as not used unless needed
***As in the Cayuga and solid colour Runners the females will often fade and get white feathers with age...they will still breed true.White feathers in the male can appear on the chest with age if a number of males fight, if this is not the cause DO NOT breed from them.

STANDARDS:*
Black Bill,Eyes, legs as black as possible.Plumage glossy with a beetle green sheen. Also available in Blue which can be 'mucky' with brownish tinges

Names Le carnard Labrador in France/Belgium
Country Of Origin;......... Probably the Americas Mentioned in all the 1870's books
Carriage;  . .Similar to the Campbell ducks angledfront
Purpose;..........Eggs../ exhibition / cuteness, slug hoovers
Egg Colour..............  grey/white similar to the Cayuga
Egg Numbers  .............10 /20
Breed Defects. . . . . .white in males feathers.White feathers in the male can appear on the chest with age if a number of males fight, if this is not the cause DO NOT breed fromthem.
Breed Defects. .. . . odd coloured bill, pale legs , orange legs
Breed Hints..... . Kept as trio or pair .. will go broody and hatch
Weights;4 to 5 pounds
Breed Tip  ***As in the Cayuga and solid colour Runners the females will often fade and get white feathers with age...they will still breed true.
Flying .  . . .can fly well if startled. If collecting new birds ask for them wing clipped first
Genetic profile/  Gene : Extended black/   symbol E/   Dominant.  Causes solid black pigment to be laid down in all areas except those influenced by genes for white spotting. Typical of the Black Orpington, Black Cayuga and Black East Indian. Evidence exists suggesting that extended black influences eggshell color giving it a grey tint. 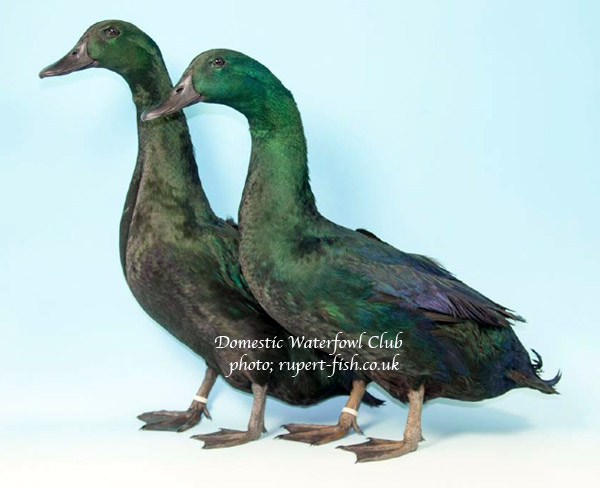 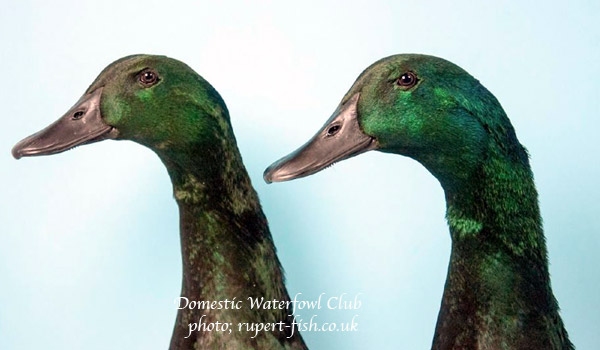 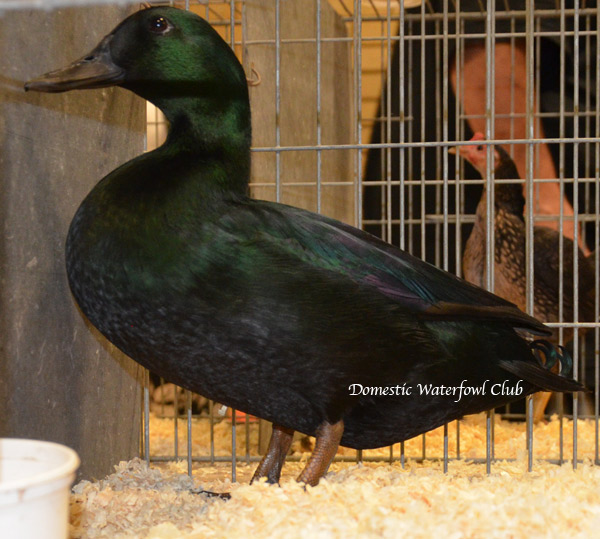 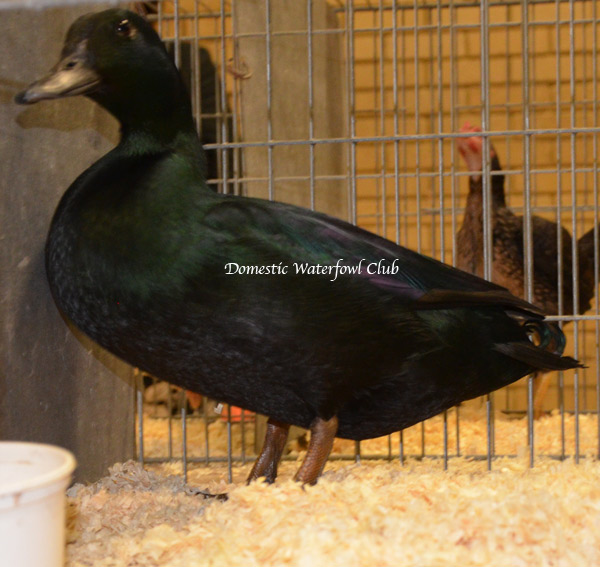 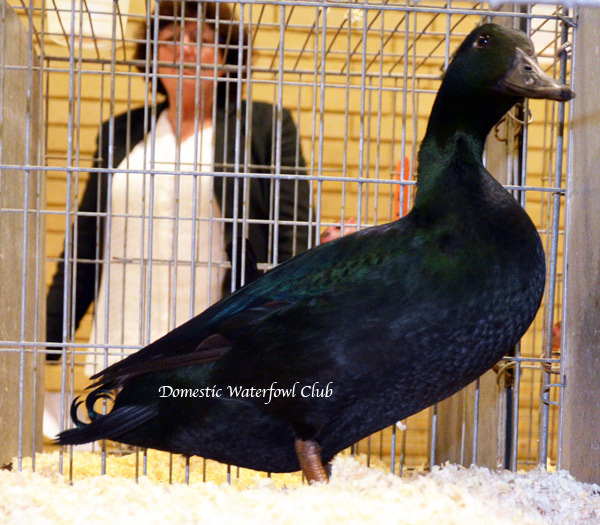 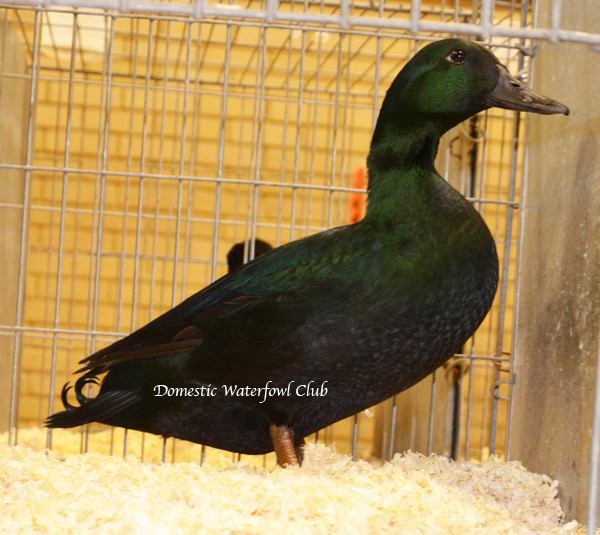 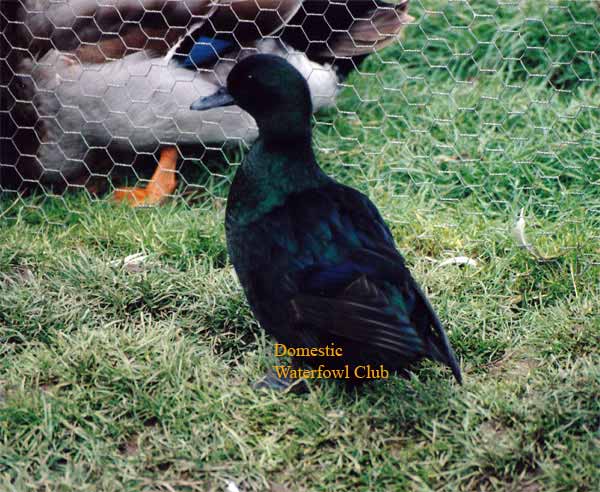 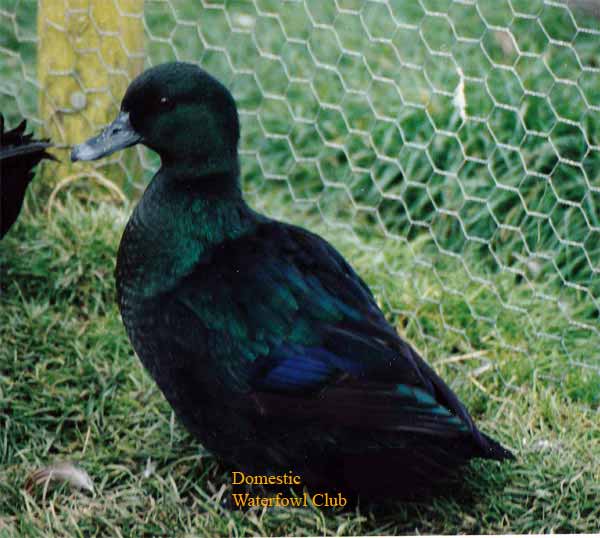 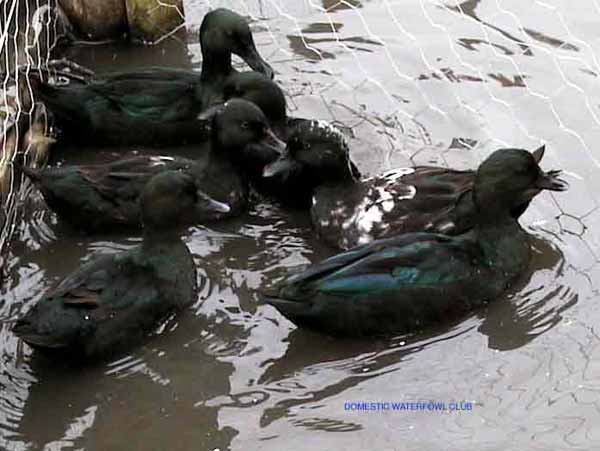 
Breed History; . . . A variety not usually met with, but which deserves to be better known, is that advertised by the Messrs. Baker as the Labrador Duck ; the Zoological Society have had it under the name of Buenos Ayres Duck, and received it from that place ; in the south of England it is known as the Black East Indian
Duck. . . . . We may at once discard the claim of Labrador, however rich in wild specimens, to the honour of sending any new tame variety of bird. Believing that our Tame Ducks are all importations from the East, I should give the preference to the Indian title. Nothing is more probable than that the Zoological Society had their birds from the East, via Buenos Ayres. Whether the stock had been introduced there a month, or twenty years previously, does not alter the main fact ; while ships direct from India would be very likely to land a few pairs at the first Channel port they touched at. By some country dealers they are styled Beaver Ducks, in allusion, perhaps, to a black beaver hat. These persons esteem them highly, and usually send them to London alive, where, if good specimens, they are eventually disposed of to amateurs at the rate of eight or ten shillings each. But from whatever quarter obtained, they are handsome creatures. A little girl, at her first sight of them, could not help exclaiming "Oh! what beautiful golden-green Ducks!"  The feet, legs, and entire plumage, should be black; a few white feathers will occasionally appear; but I had some birds that were immaculate, and such should be the model of the breeder. The bill also is black, with a slight under-tinge of green. Not only the neck and back, but the larger feathers of the tail and wings are gilt with metallic green ; the female also exhibits slight traces of the same decoration. On a sunshiny day of spring, the effect of these glittering Black Ducks sporting on the blue water is very pleasing, especially if in company with a party of the Decoy breed in strictly Mallard plumage. A peculiarity of these Black East Indian Ducks is, that they occasionally that is, at the commencement of the season lay black Eggs; the colour of those subsequently laid, gradually fades to that of the common kinds. This strange appearance is not caused by any internal stain penetrating the whole thickness of the shell, but by an oily pigment, which may be scraped off with the nail. They lay, perhaps, a little later than other ducks, but are not more difficult to rear. Their voice is said to differ slightly a fact I have not observed : but they are far superior to others in having a high wild-duck flavour, and, if well kept, are in just repute as being excellent food when killed immediately from the pond, without any fatting. My attention was first called to them by a friend and neighbour, to whom I am indebted, not only for the information, but for handsome specimens. 1848 Teatise on the History  and Management of Ornamental Poultry and copied later in   the  American Poulterers Companion of 1867.  As the Cayuga and Black East Indies share a common genetic past the date they split and one was kept bantam whilst the other was 'improved' for size  or vice versa this has yet to be located but after 115 poultry books checked it will turn up eventually

1861,  Mrs. Fergusson Blair wrote in The Henwife that " there is not a great variety in our domestic Aylesbury ducks ; only three distinct exhibition Ducks. breeds exist, viz. the Aylesbury, Rouen, and Buenos Ayres or East Indian." Though, curiously enough, the last named has now practically disappeared, being replaced by the Cayuga . . .

The breed has been written about since the first standards in 1865 but has been known by a variety of names such as "Buenos Aries Duck'" Labrador' and "Black Brazilian".Tegetmeir in the 1860's talks of the(London) Zoological Society recieving a pair from Beunos Ayres  but qualifies it saying that the ship came from that port but stopped at many others. They were then not known as having been in Labrador ( p 355 Tegetmeir) .They are mentioned in Lewis Wright in the 1890's as a beautiful bird selected for no white or brown feathering and being around the 4 to 5 pound weight....now they have been bred down to 1.5 to 2 pounds. 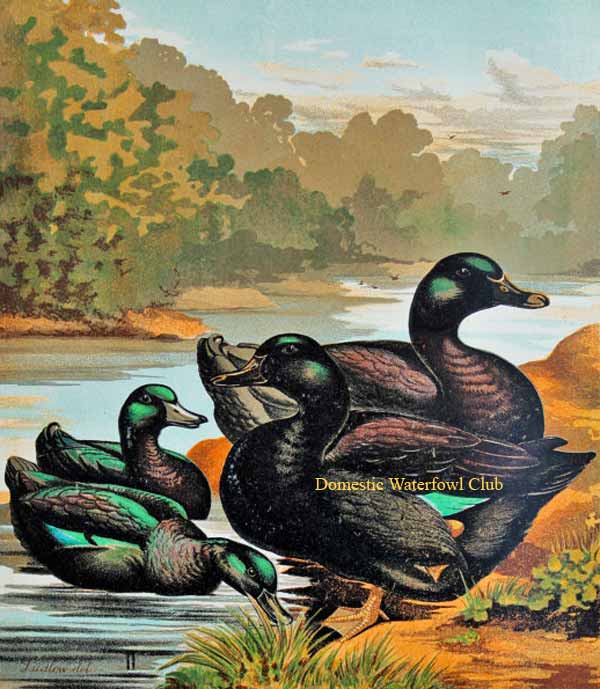