That this breed is now getting the popularity and recognition it deserves in theBritish Isles is very pleasing to me as it has long been one of my favourites. It was in the 1970's that imports to the U.K. from our fellow member in the U.S.A. Darrel Sheraw again started a once popular breed on an upward curve again. At first folks over here were very keen but then realizing the problems of producing a near perfect specimen some fell by the wayside. Very near the start of my association 20years ago I remember discussing them with Vernon Jackson. I recall his saying to me that we didn't need to have imported the stock as wealready had the raw material in this Country. I had the two breeds and used a Fawn & White Runner drake onto a Cayuga duck with quitesatisfying results. It has also answered for me quite a few of the recurring problems that happen when breeding Magpies. The lines underthe eyes of ducks, the marks on the breast, the black branch down behind the legs, the lacing sometimes seen under the wings and thespotted beak turning to a cucumber colour in late life, all speak of the parentage.
They do also have a reasonable appetite and the drakes make good eating, the colour pattern meaning you don't get black stubs on the breast. They also have the advantage that you can select reasonably marked specimens at day old.
The history of the breed does suggest it was originated in 1918-191 9period. In the 1921 Feathered World Yearbook it was reported how hardy they were, one breeder reared 285 In 1920 with only three deaths! Anadvert late in the book by Oliver Drake of Holme in Yorkshire shows a group of approaching 20 birds saying this new commercial breed has aflock average of 185 large eggs. Again in the 1923 Yearbook two photos of Magpies one of a drake and one of a pair appear, the latter purchased from Oliver Drake for Captain Greenaway - more of him later. As these plus Runners and Campbell's were the only breeds illustratedit showed how their popularity had risen.
By 1923 they were being shown in consistent numbers, at the Crystal Palace 20 in 2 classes. In Birmingham 2 classes mustered 17 entries. Now to Olympia where there were a number of Club Shows, including theWaterfowl Club, Buff Orpington, Magpie and Coaley Fawn (where did they go) 7 classes for Buff Orpington produced 1 13 entries. Again the Magpie entries in 2 classes were 20.
An interesting little aside in my research is that in the 1923 Yearbook a full page advert appears from the Abacot Duck Ranch owned by Oscar Gray, Friday Wood, Colchester and amongst his breeds listed are Magpie Ducks and Hooded Rangers (our original Abacot Ranger's)..........Old illustrations all seem to show one characteristic which is now under debate. The slightly dished bill has until the last year always been seen in the best birds and as I said before Captain Greenaway who became Lord Greenaway, came into the equation from another side in that his poultry manager, J.S. Parkin, brought the title Stanbridge Earls Poultry Farm with him to Kent when he came to work for Lord Greenaway.
From the white sports of the Magpie they developed the StanbridgeWhites, a utility white duck which had a slightly dished bill. Over the last 20 years or so it was fairly easy to spot 'White Campbell's" which were not so and which had the aforesaid dished bill and if penned a green egg in the showpen.
Magpie Ducks as I said at the outset now seem to have again attained their former glories. Not only in the original Black & White but the Blue & White also which have been around since beforeWorld War 11. Dun & White have made appearances but no-one seems to have consistently bred for this one colour. We hear of Chocolate & White on the Continent also Lavender & White over here but this colour seems to be open to debate as the Blue & White is actually a fairly light blue. Congratulations to the breeders of the top class specimens being shown and also the judges with the courage to put up a marked bird, in contrast to a self-colour. Michael Hatcher
****Finally a tip for the newcomers to the breed. You can breed well-marked drakes from well-marked parents, but to get your ducks right you need somewhere around a 50% black marked duck to your perfect drake.****

Magpie Ducks are a modern breed originally from Wales that was bred for both its meat and its egg production.They are the most difficult a breed to produce a show quality bird. They are good broodies and quite long lived ( av 9 yrs up to 12+). Originally a triple purpose :egg, meat, and show bird. Possibly similar to the Huttegem or Oudenaarde Duck. The Magpie duck is believed to have originated in the early 1900s, having been developed by Oliver Drake and M.C. Gower-Williams in It is possible that they were selectively bred from the Belgian Huttegem an old breed that was popular in the duck-raising area north of Brussels in the 19th century. Descriptions of the Huttegem are remarkably similar to the modern Magpie duck, and old pictures show many of the features of the Magpie including the coloring. The Magpie duck was imported to the United States from Great Britain in 1963, but  they number in the low hundreds .

The markings are specific ie a cap on the head; white neck / front etc with a coloured heart shape on their back; thighs white
Country Of Origin;.  ........Wales . An early 20th Century Breed mentioned from the 1920'sonwards
Name in Europe : France = Canard Pie
Carriage;   Similar to the Campbell ducks but a substantailly more well built duck ie useful for the table if needed
Purpose;...  .......Eggs..Meat...Broody...a good utility duck
Egg Colour.....................green / blue ..large many now lay white eggs after crossing out. ***Could anyone with a blue egg laying magpies for sale please contact Mike
Egg Numbers  ............. 220–290 large white eggs annually but the earlier standards were all for blue eggs
Breed Defects.            Legs and webs should be orange but often mottled; lack of cap ;Coarseness in markings etc. . . . . . are that the colouring is virtually impossible to get to the Show Standards ie a high number of rejects including pure whites (originally a separate breed Stanbridge Whites) and that the bill discolours with age making it possibly one of the few breeeds that shows best when it is a 'point of lay'.
Breed Hints....   Kept as trio or more ie can be a family group
Weights;   5 to 7 pounds. This is an average size bird (weight Drake: 2.5 – 3.2 Kg, Duck: 2 – 2.7 Kg ).
Breed Tip    ****Easily sorted as a duckling as all white and mismarked ones can be weeded at birth ****
Flying .  rarely flies a goodback garden all rounder;
Genetic profile. . 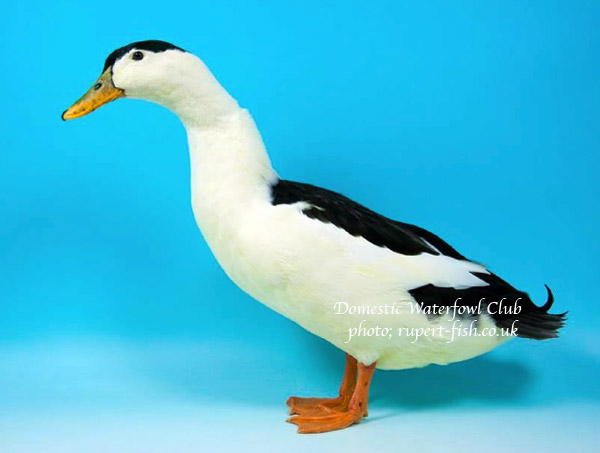 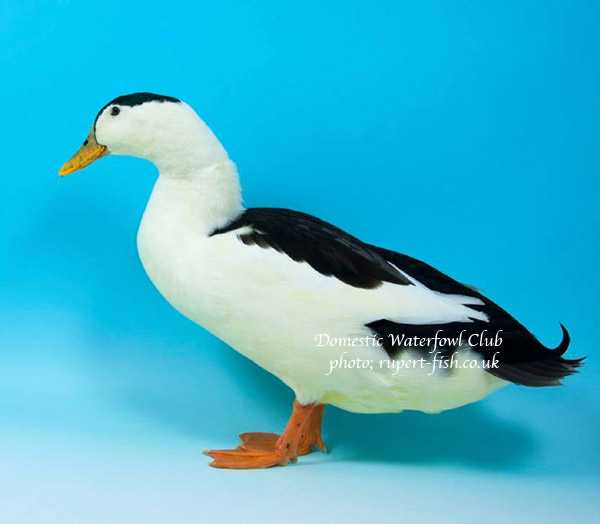 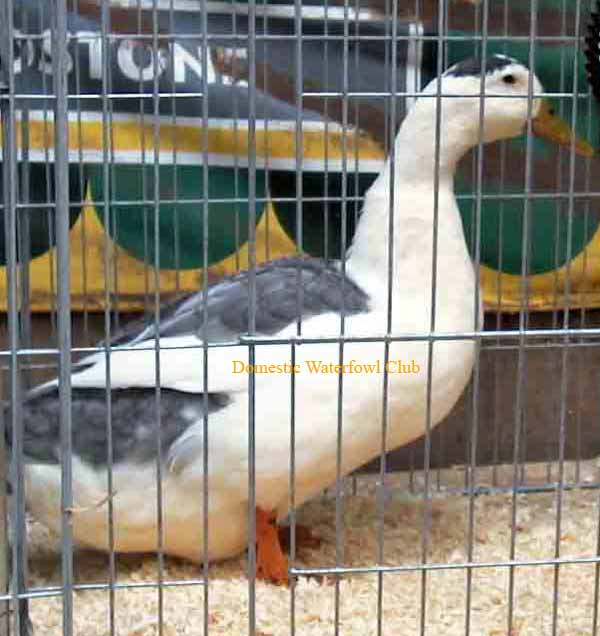 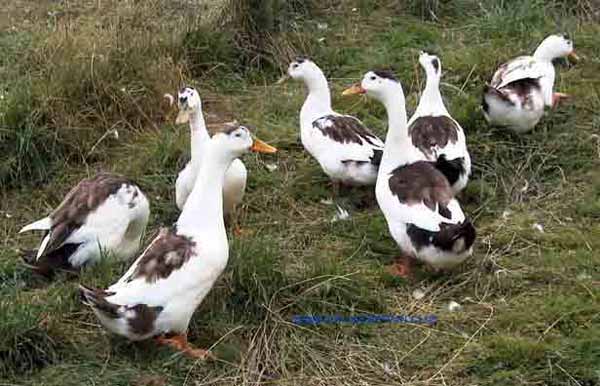 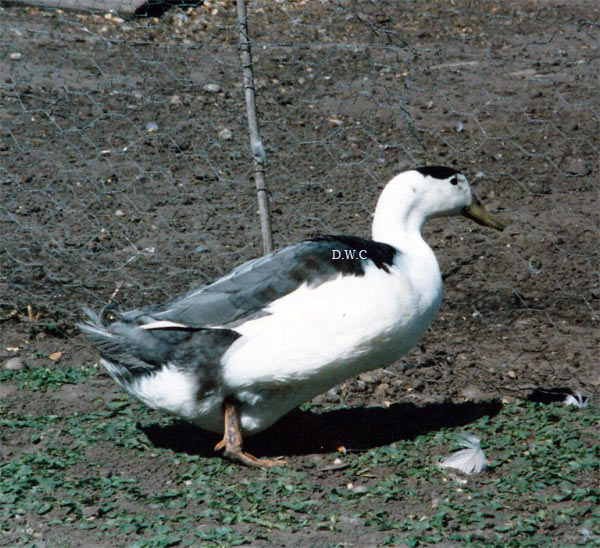 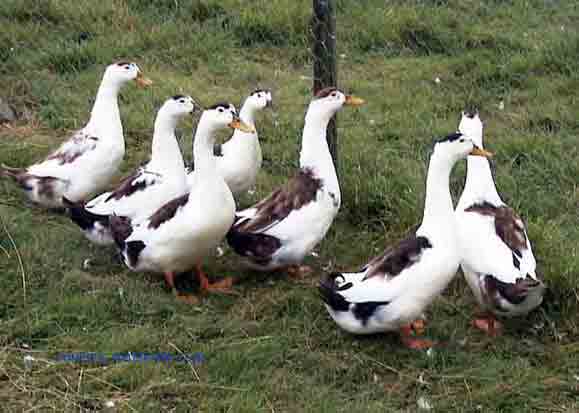 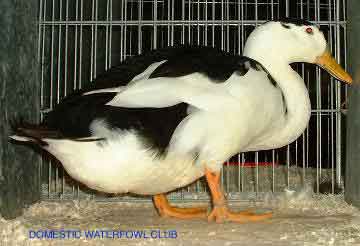