BREEDING CONDITIONS:
The crest is formed from a mass of fatty tissue that emerges through a gap in the cranium/ skull. From this, feathers grow. Crests vary from centrally placed, full crests, rather like powder puffs, to knobbly protuberances with just a few feathers; or the occasional earring when it has 'slipped'. The crested gene can be bred into any breed except Muscovy as one parent crested will breed a percentage of crested offspring . Crested to  crested seldom breed successfully but if they do will produce better stock. If using a crested female with a large crest watch as the drake uses this as to ' assist ' mating and she can get injured easily.The tuft of feathers on the head, which occasionally appears, having been recognized as a point of attraction, selected and bred for of the off spring many will be plain headed but carry the crested gene so a crested drake will turn any breed crested . . they also have the energy for this so watch out
The crest gene is an incompletely dominant one. ie, if an chick receives a double dose of the gene; one from each parent (homozygous) it will die in the shell. If only one of the parents passes it on (heterozygous) the resulting hatches will be  as an average :-25% will not hatch, 25% will not have crests and 50% will have crests.
If a crested heterozygous bird is crossed with an un-crested one, theresulting hatch should be 50% of the ducklings that carry the gene, but might or might not show thecrest         50% of theducklings that do not have the crested gene
If you breed two ducks together that each have the crested gene, youwill get:
25% of the ducklings that are dead in the shell
50% of the ducklings that carry the gene, but might or might not have acrest
25% of the ducklings that don’t have the crested gene

The Lethal Crested Gene
This gene is a dominant gene with a lethal variant. If C=crested andp=plain non-crested, it works like this:
Crested Drake =C p (this means that a cresteddrake in a pen can turn any breed crested)
Crested Duck = C CC Cp
their offspring will be:- pp isa non-crested duckling,....Cp is a crested duckling,..CC (theoretically crested) dies in the shell due to skull deformities.
As you cansee, breeding Crested ducks is challenging and not recommended for beginners; also if the crest is so large as to intefere with normaleating and mating etc it would need to be 'trimmed' to allow the duck a normal life as some will intefere with the eyes. 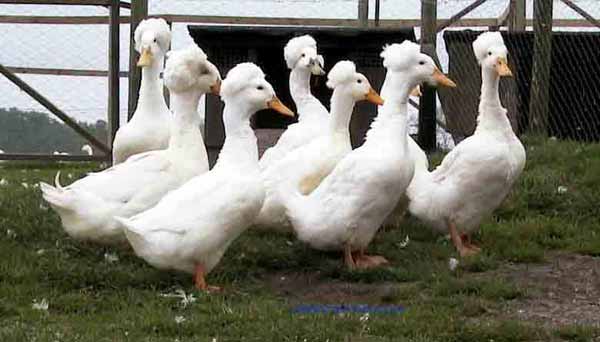 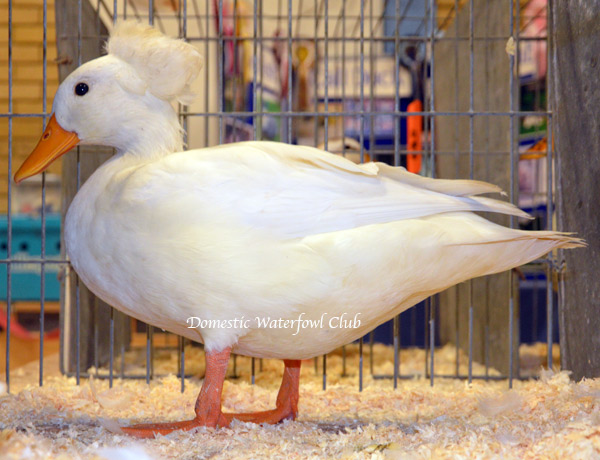 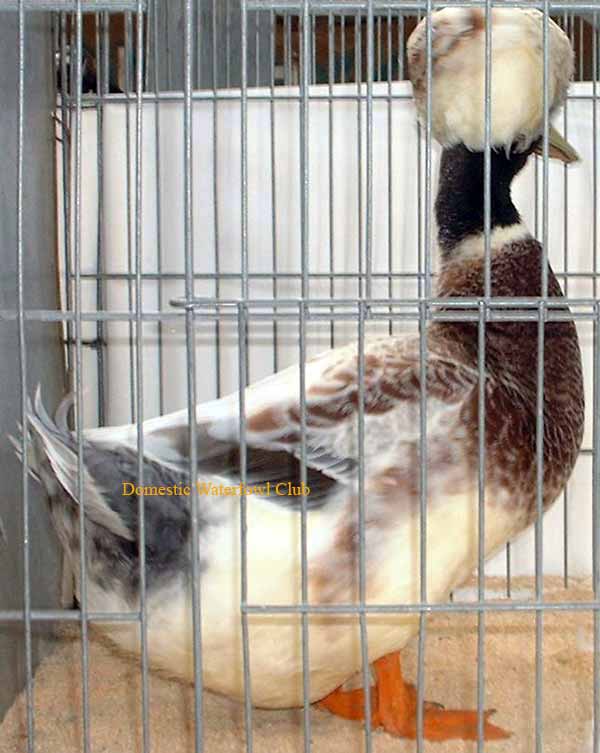 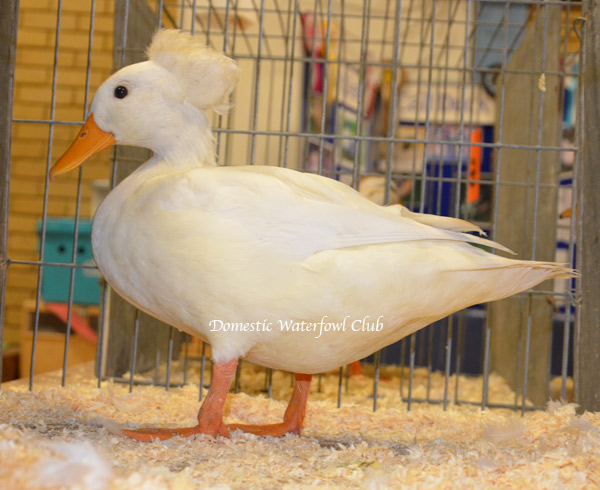 Breed History; . . .Crested ducks are basically a genetic error appearing in any colour and as such have a mixed history. The crest is  a mutation associated with skull deformities and known for hundreds of years. Some claim that crested ducks first appeared in Britain, which is unlikely but they were certainly first Shown  and written about here and appear in many early poultry books . Genetic mutations appear  anywhere in the  the world. Selective breeding would then have increased the numbers of birds with the same characteristic. 17th century Dutch paintings show crested ducks on wildfowl such as Melchior d'Hondecoeter (1636 -1695) and Marmaduke Craddock (1660 - 1717) from Somerset in the Uk showed them They are recorded as "The cottagers living on the northern coast of Norfolk, have
one or two varieties that are very pretty, and are not usual, one of a slate-gray or bluish dun, another of a sandy yellow; there are some also with top-knots* which rival the Hookbilled Duck in oddity." And also * " Some of the tufted tame Ducks, near Salisbury, are very handsome, having crests as compact and spherical as any Polish Fowl ; but whether this is, or was, any distinct variety, I will not undertake to say." H H These are from 1857 Teatise on the History  and Management of Ornamental Poultry 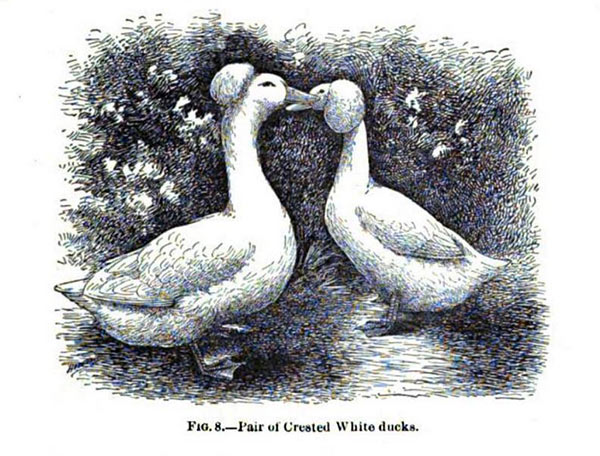 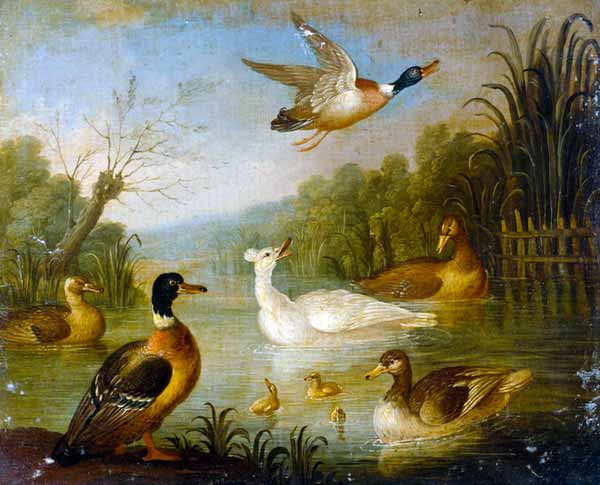 Craddock 'ducks on a pond' 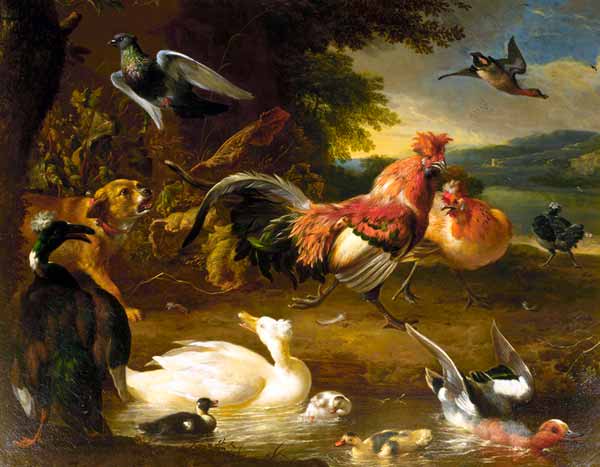