The Shetland duck is black with white breast and occasional spotting . Shetland ducks share the same ancestors with other north European duck breeds - Pomeranian duck and Swedish Blue duck, however they are much smaller size.  Shetland Ducks are distinguishing characteristic is their blue bill. Shetland Ducks are native to the Shetland Islands in Scotland, the northern reaches of the UK. The male Shetland Ducks have light blue or sky blue bills and the females have gray or slate blue bills and the Shetland duck is semi-erect. Shetland Ducklings will be dark grey with a beige or cream bib and  also have dark blue bills that lighten with age. The Ducklings often have a mottled black or grey pattern on their heads, and may have light or dark patches around the eyes. If pure bred is little larger than a mallard and rangy semi upright in posture . The pure bred is critically endangered but as in Swedish and Aylesburies most advertised as Shetland  Ducks owe more to Heinz ( 57 varieties) than Scotland. As in Cayuga they fade in the females with ages and revert to white.

Profile is a cross between a skinny Campbell and a Mallard. To gain respectability they need Poultry Club close ringing ( 15mm !) and a few breeders to have many years of birds breeding true to size and markings 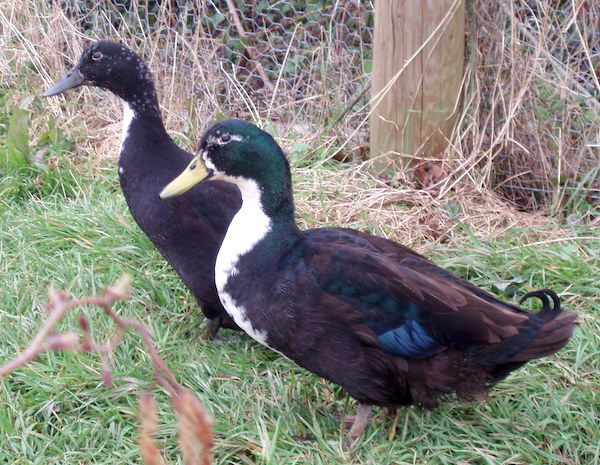