Buff Orpington  Ducks.
.
HISTORY: The Buff Orpington Duck originated as a cross breeding programme between Indian Runner ; Rouen ; and Aylesbury  in Kent in order to create a dual purpose breed. According to Lewis Wright "the origin of the Buff and the Blue Buff and Blue Orpington duck: Orpington " Buff Orpington ducks were
Ducks. made some twelve or fourteen years back, but not brought into prominence in England until 1898, when they were shown at several large shows, such as the Dairy and Crystal Palace, where classes were guaranteed for them by Mr. A. C. Gilbert, who also at the same time drew up standards for them and formed a club for them. In Australia they had previously made their reputation by winning two twelve months' laying competitions in succession. "They were made to fill the demand for a first-class layer, and at the same time a nicesized table bird of fine quality and flavoured flesh. The start was made by mating Indian Runners to Aylesburys, Indian Runners to Rouens, and Indian Runners to Cayugas.. . . . ..  This put the idea into the head of the originator (the late Mr. William Cook) to make a Blue
Orpington duck, as well as Buff Orpington ducks ; so the darkest and the ones with most blue markings were put on one side and mated with Cayugas and Pckins. Then the same process went on with these, mating and intermating, until the Blue Orpington ducks were a finished article, the same as the Buffs.

It was introduced a few years after the Khaki Campbell and can suffer from the fact that although it used to be written of as an egg laying breed with high annual laying figures it is now more respected for its plumage and colouring. It is capable of laying up to 220 eggs a year. Originally created by William Cook of Orpington, Kent, UK, from the selection of mis-marked Blue Orpington Ducks; Cook was also the developer of the Orpington chicken. The Buff Orpington Duck was introduced to the public at the Dairy Show, the Agricultural Hall  Islington, London in October 1897
There are a few Blue / Lavender Orpingtons About as well as the more usual Buff. The original breeding was Runners mated to Aylesbury ( how ? ) Then Runner to  Rouen and Runner to Cayuga. Progeny from these was then selectively bred to fix the Buff colour and egg laying potential . . . the Rouen eyeline and neck band is the first bit to re surface in any cross/in  breeding.

Coaley Fawn bred by Miss N Edwards of Coaley in Gloucestershire died out  some years ago but were originally buff ducks with  chocolate heads in the drakes and orange bill and legs making them resemble an Orpington/Campbell cross . Last seen for sale pre 1958 so  please stop asking to buy them. . . they do not exist any more.. . . unless anyone knows different?

There are a few Blue / Lavender Orpingtons About as well as the more usual Buff but are often unstable. The Buff Orpington is an unstable colour due to a blue dilution gene which means that from the offspring, all three colour variations ( Buff, Blond and Brown) will appear
Names:-Orpington Fulva in Italy
Country Of Origin;......... England (Kent) An early 20th Century Breed mentioned from the 1920's onwards as a fixed breed
Carriage;Similar to the Campbell ducks but a substantially more well built duck ie useful for the table if needed
Purpose;..........Eggs../ broody/meat/exhibition
Egg Colour.....................The eggs weigh 65 g and are white
Egg Numbers.............180 /200
Breed Hints....Kept as trio or pair .. will go broody and hatch 28 days
Weights; 5 to 6 pounds. This is an average size bird (weight of theduck: 2,5 kg; of the drake: 3 kg).
Breed Tip*** Both colours suffer from fading in the colour of some females with age
Flying .. .rarely flies a good back garden all rounder; 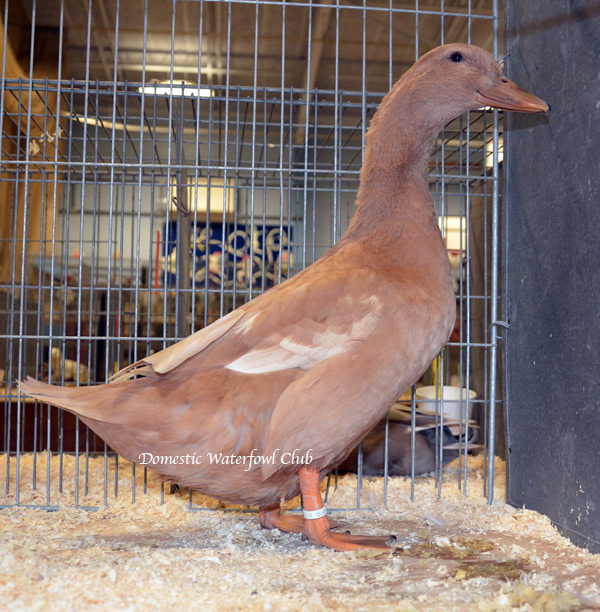 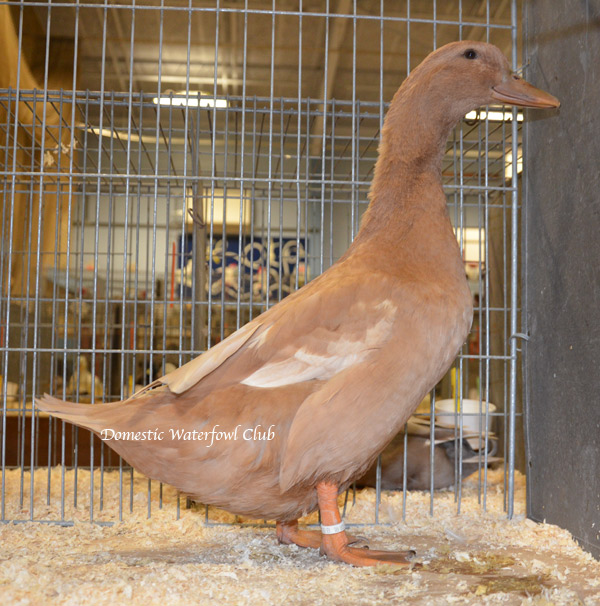 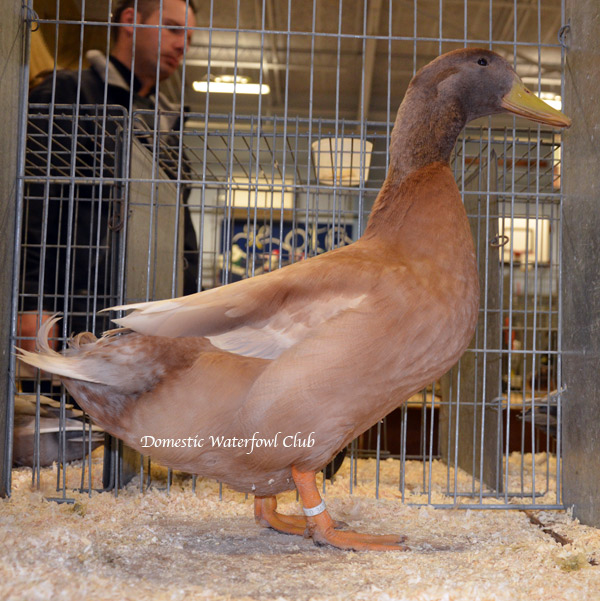 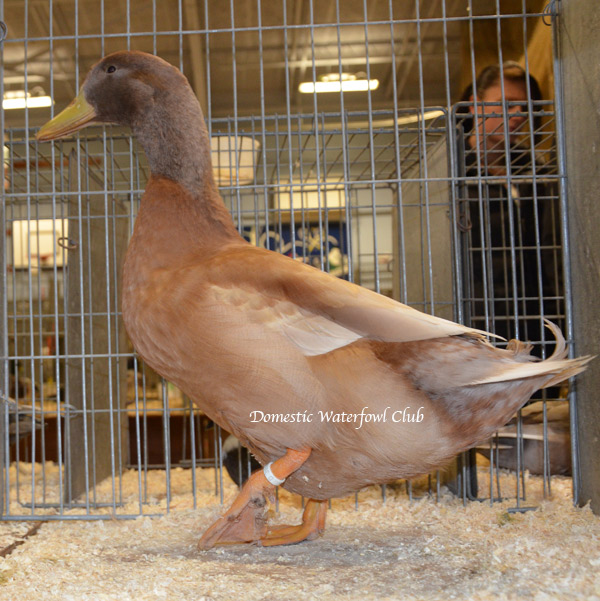 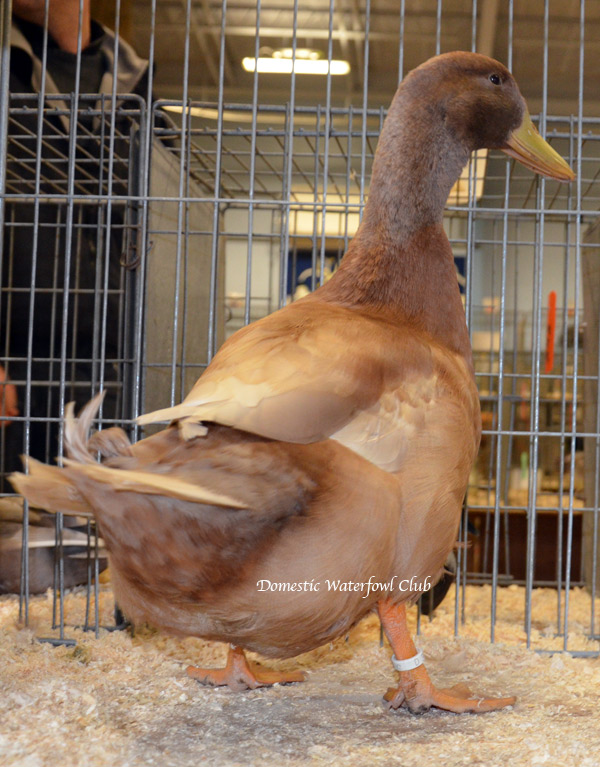 Showing rear end colouring that is hard to achieve ! 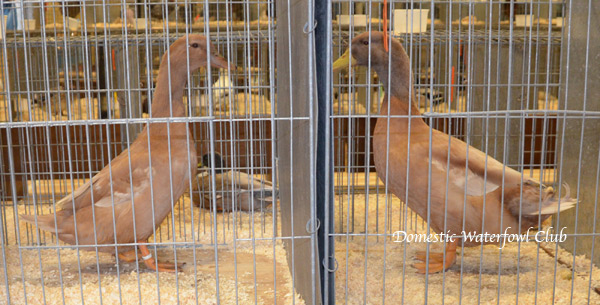 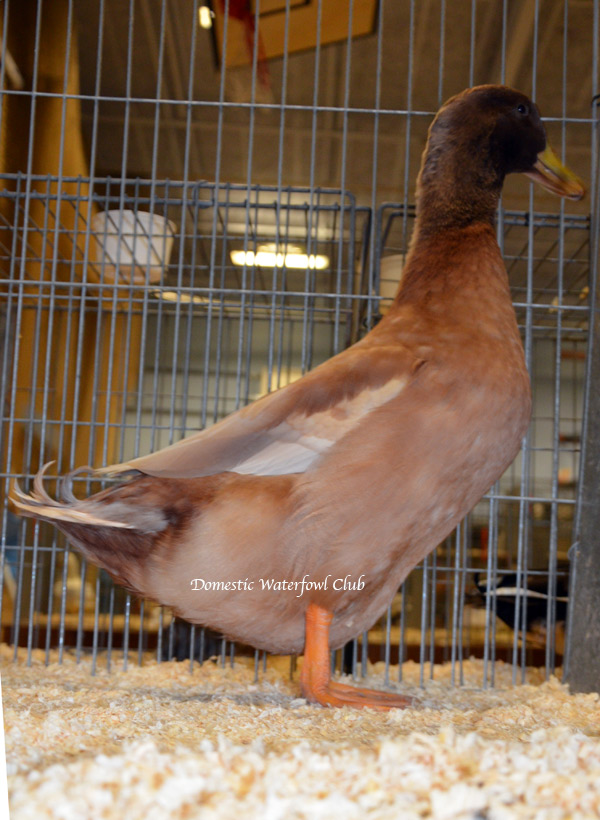 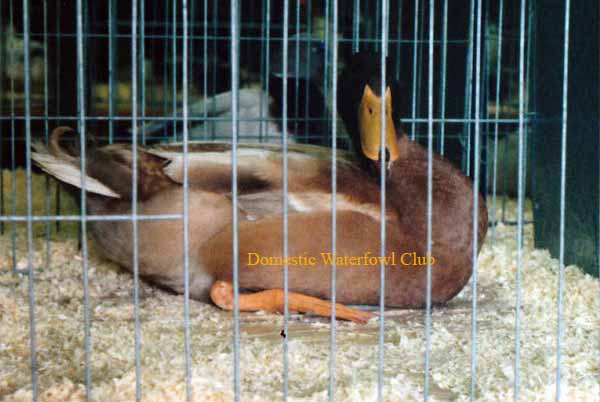 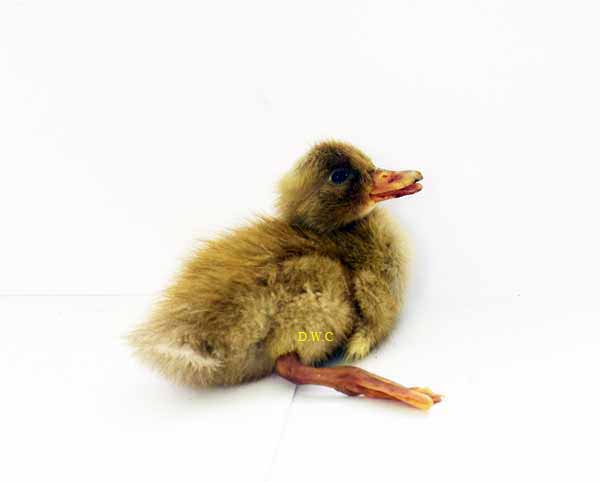 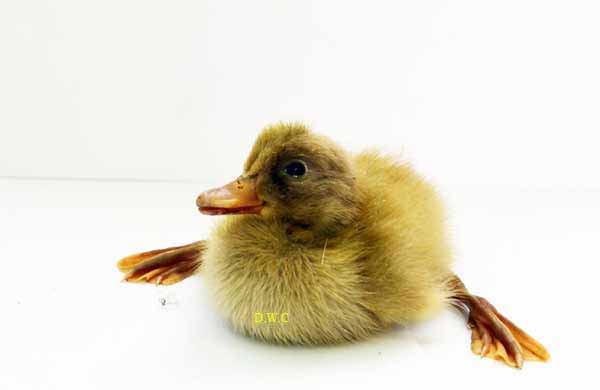 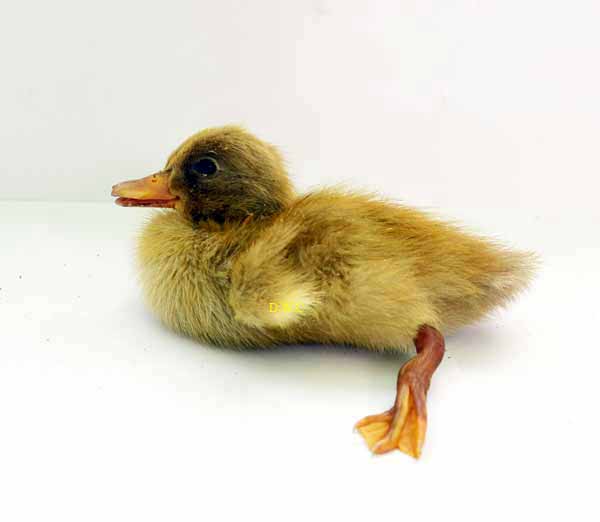 Bill and leg colour should match when hatched, even colouring slightly differing to tail feathers