Breed History; . . .
Originally refered to in the early books such as Lewis Wright and others as the Decoy changing about the 1850's to the name Call. They are described  in the 1848 Teatise on the History  and Management of Ornamental Poultry as being white and imported from Holland as a novelty for the great estates . Colours known then were the dark (Mallard) and the White.His comments upon them was that "The flesh is good:but there is too little to repay breeding them for the table, and their only proper place is on the lake.

STANDARDS:*
A short compact and cobby bird with a round face and short bill...as a rule it should be shorter than the last digit of an adult thumb...maximum length 1 1/4 inches / 3.1 cm. Due to the large number of colours for further information about colours see the page for the Call duck club at  http://www.thebritishcallduckclub.co.uk.

Names  Also known as Le canard Mignon in France and Belgium. Mignon in Italy
Country Of Origin;........ Great Britain. known since early Victorian times mentioned in Tegetemeir
Carriage;  short compact and cobby bird
Purpose;..........Eggs..Meat(soup or spatchock! ie tiddly )...Broody...a good utility duck
Egg Colour.....................white
Egg Numbers .............They lay one clutch per year normally.......thus will not sit and brood if the eggs are removed 10+ per yearr
Breed Defects. .  . . . .bill length then according to colour
Breed Hints....  Kept as trio or pair .. will go broody and hatch
Breed Tip   ***Kept as pairs or alternatively trios .Need water swims for pleasure** check good fox proofing as the female can be heard for quite a distance
Flying .  Excellent fliers can thus be pinioned which some people like it involves removing the end of the wing surgically !...the ducklings have to be done as babies NEVER as adults ..consult the vet for further information about this. If not clip the wings or net new birds to curtail their homing instincts  until settled in if not  be prepared with a landing net and set of expletives 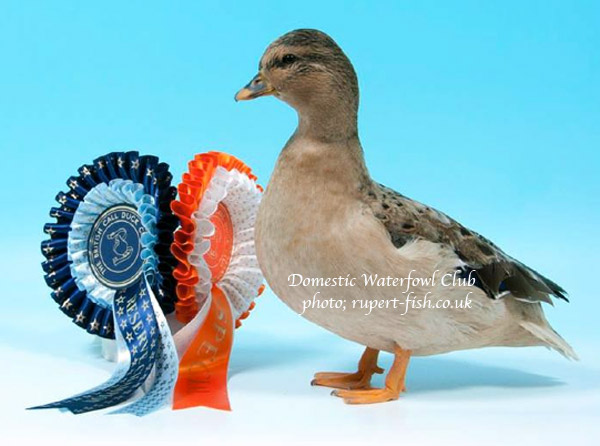 The one breed that nibbles anything !